The clocks a ticking...

With less than a month until the release of Hex's Desire, book 3 in the Chaetdorian Mates series I through I would treat you all to a little excerpt and a glimpse of the cover for book 4, titled Twin Addiction.
Yes, the twins, Jepa and Hecto are getting their own book :D You'll get to know the lovable pair a little better in Hex's book and get an idea of where their story and the future of all the characters is headed.
So, without further ado, here we go...


Looking him over, taking in his lean muscular body, her cheeks burned. She knew these aliens were huge, but... wow! The large appendage straining within his trousers left her mouth watering.
“I’m glad you like what you see, my sweet,” he said with a smirk. His cool voice sent shivers down her spine and straight to her core. “But I think I better introduce myself before this goes any further. I’m Hex.”
“Katie,” she found herself replying breathlessly.
“I know.”
Hold on. “You do?” How could he know who she was? She had never seen him before. She would have remembered him, that was for sure.
For some reason, he turned a little sheepish at her question, nervous to answer. “Well, I may have watched you on the cameras aboard the ship a few times.”
“You what?” Had she been wrong? Was this guy nothing but a giant perv?
“I saw the way you took out Dekon, the male that attacked your friends in the holding bay. Ever since then I’ve been bewitched by you. Are you sure your names not Samantha?” he teased with a wink.
“I’m no witch,” was her instant reply before she realised what he’d just said. “Hold on, you watch Bewitched?” 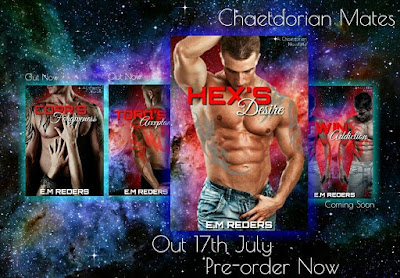