Amber & Lochlann's story is now available for FREE for the next 3 days in celebration of the release of book 2 Beth & Al. So grab your free copy while you can.

Twenty minute later she couldn’t keep the smile from her lips as Dash dropped money on the table and left with a wink. She had been so worried at the start, but she was so glad Dash had been her first, he had sensed her fears and helped put he at ease with his usual wit and sly innuendos. Sometimes she really had to remind herself that Dash was a vamp, he seemed so human at times.
“That vamp sure is full of himself,” Al commented entering the room, his eyes showing the laugher he wouldn’t express aloud.
“Yeah he is, but it helped.”
“You were really worried about dancing again weren’t you?”
Pulling a silk gown from the table draw and pulling it on, “Yeah I was.”
“You didn’t need to do one again so soon you know, Tristan doesn’t expect you to.”
“I know, but it was better to get the first one out the way now rather than later. Also I really need the money.” ‘And the distraction,’ she thought to herself.
Al must have noticed the sudden change in her mood. “Come here,” he said pulling her once again into his arms but this time holding her there against his chest. Leaning her head against him she could feel his hearts steady beat, could smell his manly scent. It felt so good being held in his arms, feeling his hard toned body beneath her hands. She wondered what his naked flesh would feel like, taste like.
“Beth, what are you doing?” his voice strained. Shaking her head as she was brought back to the present she realised what she had been doing. Her breasts were pressed up against him, her hands had been running over his chest, her fingers now gripping the base of his t-shirt as if to pull it up and reveal his flesh.
What was she doing? She wanted him to know of her feelings but she hadn’t planned on this.
Her heart was beating wildly in her chest, working overdrive. Looking up into his face she could see his shock at her actions but still she didn’t move.
“Beth,” his voice snapped.
Obviously he wasn’t affected by her as she was him, and why should he be, she was nothing but a stripper, a piece of meat to be gawked at.
“Sorry,” she stuttered, stumbling back and almost falling back onto the chair before Al snatched her arm to steady her. She could feel her cheeks burning as her face turned red with embarrassment. Quickly grabbing her discarded clothes off the floor she dived for the door Al had entered through and ran down the corridor to the dressing room without a single glance back.

Finally pulling the car around back Al headed inside. He didn't like being late, especially knowing that Tex wouldn't be there. The girls would be well looked after without them but there was no one he trusted more to keep the girls safe than Tex.
He was sure the girls were fine.
When he opened the doors he almost slammed straight into Gregory. “Hey watch it!” the vamp snarled, a slight flash of fangs as he pulled away from the dark haired body he had pinned up against the wall.
Raven, that girl never learned.
Making a mental note to beat his ass for once again sneaking off on the job for a ‘snack’ he made his way upstairs to the club, heading straight over to Riley to check how everything was going.
“Hey thought you were due back hours ago?”
“Yeah, got held up. How’s the night been? Any trouble?”
“None so far, but I'm keeping an eye on a few. Don’t think they will cause any trouble but Dominic seems a little off tonight.”
“Really?” glancing around to locate him. “Where is he?”
“Private dance, Gregory is watching over it.”
Dread filled him as the memory of Gregory and Raven flashed before his eyes, “He’s downstairs, I just passed him on my way up here.” If he was down there and Dominic was nowhere to be seen then that meant…
“OH HELL!” Riley yelled as they both ran for the private rooms.

Available to buy on Amazon Friday 1st November
Posted by E.M Reders at 13:20 No comments:

Beth and Al's story is on its way.
It will be released on Amazon on Friday 1st November! 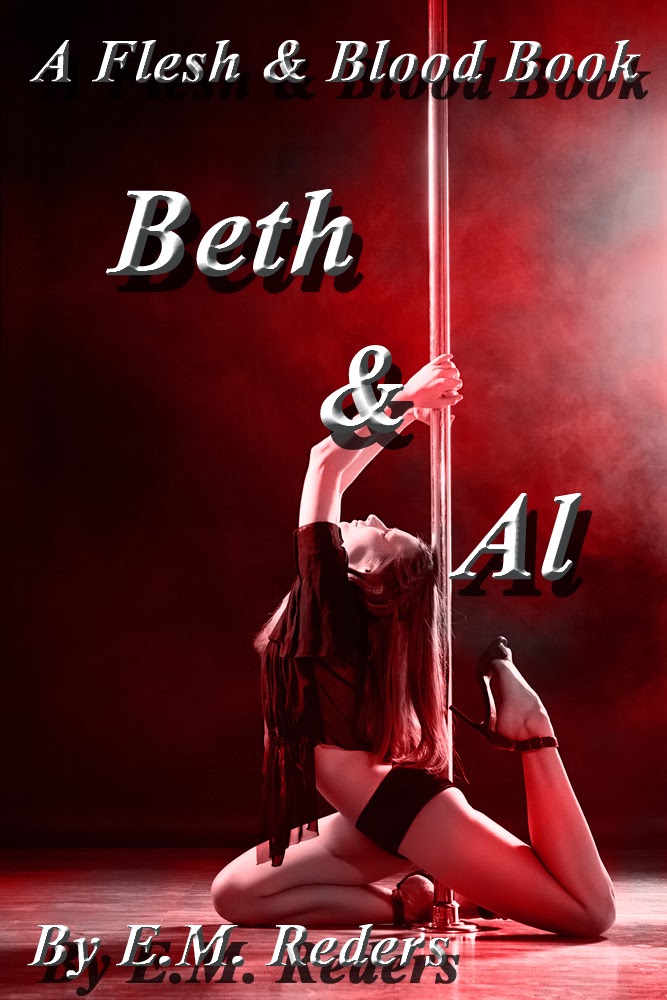 All the dancers at Flesh & Blood are fond of the Al, but none as much as Beth. After a close call with one of the members she can’t deny her feelings any longer, but finds that while those feelings are returned something is holding him back… a secret, one which threatens to keep them apart if she lets it.
Al always knew the truth would be hard for Beth to take, and recent events haven’t helped. But when someone from Beth’s past becomes a problem and she turns to Tristan for help, he’s given a chance to open her eyes and allow her to see the truth… not all vampires are bad.
Posted by E.M Reders at 07:01 No comments: